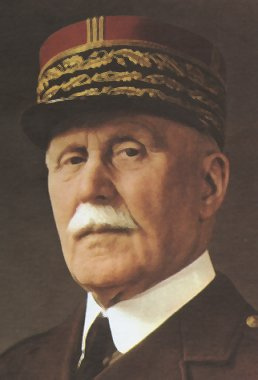 The title of Jonathan Lynn’s new play “The Patriotic Traitor” could refer to either of the play’s two protagonists. One, Marshall Philippe Pétain, betrayed France to the Germans in 1940, while believing all the time that was doing so in order to save the country. The other, his disciple and close friend Charles de Gaulle, was branded a traitor by the Vichy regime and sentenced to death when he fled the country for exile, to take on leadership of the Free French forces.

The play, which just opened at the Park Theatre in Finsbury Park, is a tour de force. The venerable Tom Conti is so good as Pétain that he completely dominates the stage whenever he appears. One wonders if Pétain himself had that same charisma and intelligence. As for de Gaulle, played by Laurence Fox, he comes off as a thoroughly unlikeable character, even if history were to prove him right.

Does this nuanced view of the two men and their relationship, this sympathetic portrayal of Pétain as a tragic figure, make the play somehow unacceptable? I don’t think so.

First of all, history is not a Marvel Comics adventure. Good guys (and Pétain from the French nationalist point of view was the victor of Verdun) can turn bad. Bad guys (the thoroughly unlikeable de Gaulle) can be transformed into heroes, at the right moment. In the case of Pétain and de Gaulle, the similarities between the two men seem greater than the differences, even if they eventually found themselves on opposite sides in the Second World War.

In this thoroughly intelligent play, written by the author of the “Yes, Minister” and “Yes, Prime Minister” television series, there is a powerful exchange between the two men set after the war. Pétain is in prison, awaiting his sentence for treason. It will be de Gaulle who decides whether he lives or dies.

Pétain explains that when he took over the country in 1940 following a military defeat for which others were responsible, he was fully supported by the French people. Earlier in the play, de Gaulle becomes furious upon learning that in a referendum, 90% of the French supported the German-imposed armistice. Pétain uses the crude democratic excuse that he represented the will of the French nation. De Gaulle answers that a nation is more than its people, that it is an idea, and that above all, it was this idea that Pétain betrayed.

Some leftist purists might be appalled at the whole idea, looking for genuine good guys in this story. The problem is that they didn’t exist. The “third camp” in France in 1940 consisted almost entirely of supporters of the Communist Party – a party which enthusiastically collaborated with the Nazis during the first year of the occupation, until Hitler invaded the Soviet Union in June 1941. There was no significant independent left force in the country. The choice for French people was either de Gaulle or collaboration with the German fascists. Most, including the Stalinists, chose the latter option.

There is a moment in the play when de Gaulle is placed in a BBC studio in London, about to make his first address to the French people. De Gaulle seizes the moment and says what needs to be said about the struggle continuing, calling on the French to rally behind him. Yes, he is arrogant and undemocratic, unbearable as a human being. But he is absolutely right, and it is a moment in the play – and in history – that one never forgets.

At the end of the play, de Gaulle tells his wife that he’ll be retiring from public life. She is shocked, cannot believe what he’s saying. But he tells her that once again, history will have need of him, and he will return as President of France, with a new constitution created just for him. And this is precisely what happened following the disastrous war in Algeria more than a decade later.

The history of twentieth century France is full of characters like de Gaulle and Pétain, unlikely and unlikeable heroes and villains.

“The Patriotic Traitor” tells the story of those two men as we’ve never seen it told before.