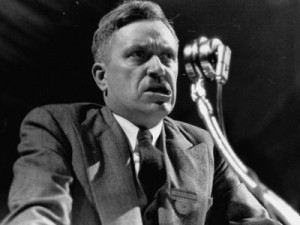 “Trumbo” is a the latest in a series of Hollywood films that looks back nostalgically at the McCarthy era, a time when the good guys were blacklisted writers accused of membership in the Communist Party, and the bad guys were the US government, studio bosses, and right-wing media.

The first of those films was probably “The Way We Were” (1973) starring Barbra Streisand and Robert Redford. Made only a few years after blacklisting had ended, when the Cold War was still raging, it became a template for future films on the subject. The film takes place over several decades, as Streisand and Redford fall in and out of love. In the opening scenes, Streisand plays the very young Katie, a committed activist, and is initially shown as campus leader of the Young Communist League (YCL).

The writers could have chosen which years to use, as the film is deeply rooted in historical events. They could have chosen 1940, for example, when Katie would have been campaigning against US entry into the Second World War, denouncing British imperialism and supporting the Hitler-Stalin pact. But they did not – they set the first scene to the mid-1930s, so Katie is shown advocating for Republican Spain and against the fascists.

The next scene is during the war, but at a time when both the US and the Soviet Union are fighting on the same side, against the Nazis. Katie is no longer denouncing Roosevelt as a war-monger (as she would have done in 1940) and is instead working hard on the war effort, and an uncritical admirer of the beloved President. This was during a time when the Communist Party’s leader, Earl Browder, infamously declared that “Communism is twentieth-century Americanism”.

The remaining parts of the story are set in the late 1940s when the Communists faced the persecution of the Hollywood blacklist, and a final scene shows her crusading against nuclear weapons in the early 1960s.

In other words, the historical setting of every scene in “The Way We Were” is carefully calculated to show off American Communists in the best possible light. They are not shown defending Stalin’s show trials, harassing independent leftists (including Trotskyists), defending the pact with Hitler, and so on. Instead the lovely Katie is backing only the most noble causes.

Films like “The Front” (1976) starring Woody Allen and Zero Mostel continued the tradition, highlighting just how awful the McCarthy era was for Hollywood, destroying the lives of innocent radicals who had done nothing wrong.

“Trumbo” is the latest version of the story. It stars the brilliant Bryan Cranston who was deservedly nominated for several Best Actor awards. But his acting aside, the film continues the portrayal of American Communists as decent people, innocent of any crime, who were victims of right-wing media and politicians.

An early scene shows Trumbo with his daughter, who asks her father if she too is a Communist.

In a cringe-worthy moment, Trumbo asks her what her favourite sandwich is. Ham and cheese, she replies. Well, he tells her, imagine if you came to school with your sandwich and one of her friends didn’t have lunch and was hungry. What would you do? Would you sell him half of your sandwich? Would you ignore him?

The little girl replies, no, of course not, I would share the sandwich. Well then, Trumbo explains, you’re pretty much a Communist.

The reality of Dalton Trumbo is a little bit more complex than that.

Trumbo, like a number of other successful Hollywood writers, was a member of the Communist Party and consistently supported the party line that was handed down from Moscow.

Trumbo admitted in an article that Stalinists in Hollywood succeeded in blocking some films from being made – films that had an anti-Soviet message. Among these was one based on Arthur Koestler’s book, Darkness at Noon.

Trumbo’s most famous book, Johnny Got His Gun, a masterpiece of anti-war writing, was allowed to go out of print following the invasion of the USSR in June 1941. Trumbo’s view was that it was perfectly correct to write and publish an anti-war book when the Soviets were allied with the Nazis, but once Russia itself was under threat, such a book sent out the wrong message.

Some people encouraged Trumbo to keep the book in print during the war. But the author did more than suppress his own best work in the party interest. As he later admitted, he passed on the names of those who had encouraged him with the anti-war message … to the FBI.

Films like “Trumbo,” “The Front” or “The Way We Were” make much of how wrong it is to name names and inform on people. In “Trumbo” several characters are revealed as weak because they do so.

There’s no question that Dalton Trumbo was a great writer, and that the Hollywood blacklist was a dark period in American history. But the Stalinist victims were in many cases no heroes, and whitewashing them and rewriting history does no one any good.

This article was published in Solidarity.