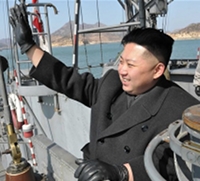 Last of the Kim dynasty?

The week leading up to May Day is commemorated each year around the world as “North Korea Freedom Week”, though you’d hardly know that if you were active in the British labour movement. British unions pride themselves on their solidarity campaigns in support of workers in Palestine, Colombia, Venezuela and Cuba, but never speak out in defense of those workers who live in North Korea, a country that is effectively a giant prison.

This year, there was a commemoration in the House of Commons and three North Korean refugees spoke, as well as someone from Amnesty International. Several people commented on the fact that while public opinion can lead to pressure on a number of countries that violate human rights, one hears very little about North Korea in spite of its abysmal record.

And this is particularly true in the labour movement. The International Trade Union Confederation (ITUC) publishes an annual report on violations of trade union rights around the world. For each country, there’s a general description, a few words about the legal situation of workers, and a page about violations of rights. For a country like Israel, the ITUC publishes a long list of rights violations. But the page about North Korea is blank.

Following the same formula for all countries, the ITUC has this to say about North Korea:

One of the mechanisms unions can use on a global scale to combat violations of union rights is the International Labour Organization, a UN body. The ILO has a committee on freedom of association which hears reports of such violations. In its most recent report, the committee mentions the word “Korea” no fewer than 38 times. But every single reference is to South Korea.

Worse than this, some unions actually welcome representatives of the state-controlled North Korean unions as honoured guests at their conferences. Recently, some major South African unions invited the nearly-defunct “World Federation of Trade Unions” (WFTU) to hold a high profile meeting in their country. During the Cold War, WFTU was the home for Stalinist unions but in recent years is host more to various tin-pot dictatorships like the Libyan and Syrian regimes. Heads of the North Korean unions spoke at the WFTU events and at South African union congresses. There were no reports of them being booed off the stage, or better, of them being disinvited.

One of those unions, the public sector union NEHAWU (a sister union to UNISON), proudly lists “international solidarity” as one of its six core principles. And yet they invite representatives of the North Korean regime to speak at their congress, and publish their speeches on the NEHAWU website.

The argument may be made, indeed has been made, that the reason why so little attention is paid to North Korean human rights is that there is so little information leaking out of the country. While it’s true that information about, say, violations of Palestinian human rights are ubiquitous, it is more difficult to find news about North Korea. More difficult, but not impossible.

To prove this point, LabourStart has just launched a special news page which is being updated daily and which includes stories about workers in North Korea. It is located at http://nk.labourstart.org. Recent stories focus on the decision by the regime to export North Korean workers to China as cheap labour. Other stories from Amnesty International and the BBC shed new light on North Korea’s network of slave labour camps.

It turns out that there are plenty of sources of information about the terrible situation faced by working people in North Korea, a country in which an estimated 200,000 people live in those labour camps. That information is out there because of groups like Amnesty International, Human Rights Watch and many groups dedicated specifically to North Korea. There is no reason for trade unions to pretend ignorance any longer.

Workers throughout the world are up against brutal regimes, battling austerity budgets, anti-union campaigns by employers and governments, struggling for the basic human right to join and form trade unions.

But nowhere in the world is the situation worse than in North Korea. For that reason, the international labour movement should sever relations completely with the state-controlled trade unions there and instead campaign in support of North Korean workers, building genuine solidarity with them.

And they should start that campaign right now.