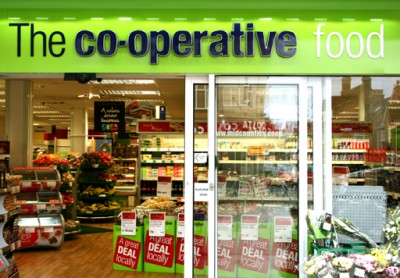 The co-operative - good with food. Just not Israeli food.

This article appears in Progress Online.

On 28 April, the Co-operative Group voted to stop trading with Israeli companies that source some of their products from Jewish settlements in the occupied territories. It is the first British supermarket chain to do so.

For those of us who support a two-state solution for Israel and Palestine and who oppose the building of settlements in the occupied West Bank, it is easy to dismiss this as irrelevant. After all, it’s not like the Co-op voted to ban all Israeli products. In fact the Co-op went out of their way to say precisely that. They’re not boycotting Israel. They’re just boycotting companies that profit from the occupation.

But before dismissing the Co-op’s decision as being no big deal, it’s worth having a look at what supporters of Hamas and the Islamic Jihad here in the UK are saying.

The Palestine Solidarity Campaign (PSC), which supports a “one-state solution” which would effectively destroy Israel, is ecstatic about the Co-op decision. “Fantastic news!” they declare on their website. “This important development … shows yet again the growing movement for solidarity with Palestine is having a concrete impact.” They are certain that other supermarkets will follow the Co-op lead.

In the eyes of the PSC, this is a massive win. They’ve managed to extend the boycott of settlement goods to include produce grown inside of Israel proper. They’ve done this by tainting Israeli agricultural export companies as bodies which “profit from the occupation”. This new concept allows one to call for boycotts of all kinds of Israeli companies and institutions not directly linked to the settlements. It’s a patient, one-step-at-a-time campaign pointing toward a complete boycott of Israel.

The Guardian’s account made no attempt at objectivity. Referring to the pro-Hamas PSC as “Palestinian human rights campaigners”, they noted that this was “the first time a supermarket anywhere in the west had taken such a position”. After quoting from several supporters of the boycott (but not the Jewish community in Britain), they concluded their account with a sneering reference to official Israeli policy. “Boycott campaigns against Israel are routinely denounced by Israeli officials as part of a drive to ‘delegitimise’ the Jewish state,” they wrote. Routinely denounced. Delegitimise – in quotes.

British Jews are deeply worried by this development, saying that “the Co-op has not fully understood the Jewish community’s serious concerns with an ever-increasing slippery-slope boycott policy.”

They should not be alone in making this argument. The labour movement should be on their side.

One can and should oppose the policies of the right-wing Netanyahu-Mofaz government. And that includes opposing the building of Jewish settlements in the occupied West Bank.

But to go from there to supporting a boycott of Israeli companies that may have “profited from the occupation” is a step too far.

The PSC’s strategy is absolutely clear and they’re not hiding it. They are taking this one step at a time.

First, persuade groups like the Co-op to not sell settlement goods. Few would speak out against that.

Second, ban goods from companies which source some of their products from the settlements. Again, few voices would be heard against that either.

The next step is to ban all Israeli products on the basis that the Israeli economy and society “profit from the occupation”.

The Jewish community is right to feel under assault. They should not, however, feel alone.

The democratic Left should oppose BDS-by-stealth, and stand with the Jewish community, saying loud and clear — yes to peace, no to demonisation of Israel.