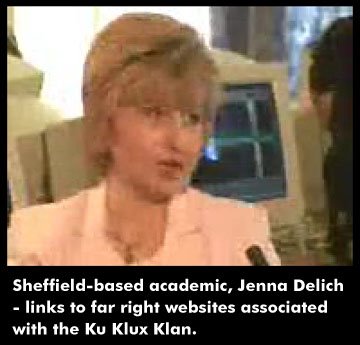 Apparently, another cowardly British ISP has shut down a political website for fear that it might be sued for libel. Harry’s Place – formerly here — made the mistake of writing about a Sheffield based academic who in the course of discussing the academic boycott of Israel on a trade union mailing list linked to the website of American KKK leader, neo-Nazi and Holocaust-denier David Duke. Harry’s Place ran the person’s name and photo, and apparently their ISP was threatened.
The name of the academic is Jenna Delich. The “offensive” photo appears to the left.
There, I’ve published it too. Sue me.
Harry’s Place has temporarily moved here.
More details about the matter are found on the ever-helpful Engage website.

2 Comments on "Where is Harry’s Place?"