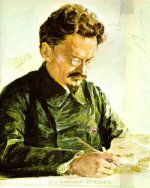 I just spotted this and cannot believe that journalists cannot write even a couple of paragraphs about Trotsky within making at least one error — significant political errors — in each sentence.
Here are two important ones:
“Trotsky was the founder of the Red Army, and along with Vladimir Lenin, one of the prime movers in the Bolshevik revolt that overthrew Tsar Nicholas II.”
Wrong. Neither Trotsky nor Lenin was even in Russia when Tsar Nicholas II was overthrown. The Bolsheviks overthrew the Provisional Revolutionary Government, which at the time was headed by Kerensky.
“Today Leon Trotsky is almost forgotten, even though he was a real Russian Che Guevara — a revolutionary who dreamed of global revolution,” Alexander Smirnov, organiser of the exhibition at the Museum of Political History, told AFP.
Wrong. Che Guevara was a totalitarian Stalinist who would have been happy to plunge the world into nuclear war, had no problem with the persecution of dissidents (including homosexuals) and so on. His own party ruthlessly crushed Trotsky’s own followers in Cuba. Trotsky is known today — and respected — precisely because he became an outspoken opponent of the totalitarian shift in Soviet Russia.
A generation ago, we had to contend with Stalinist media that lied about Trotsky. Today our enemy is ignorance.

4 Comments on "Trotsky: Can’t the media get anything right?"