This evening marks the beginning of Holocaust Memorial Day in Israel. It is also Adolf Hitler’s 120th birthday. What an appropriate day, therefore, for the United Nations to convene its international conference on racism and to have as its only head of state to attend the event the Holocaust-denying, anti-Semitic, gay-bashing, trade-union repressing president of Iran — Mahmoud Ahmadinejad.
I was very proud of the fact that Israel and the United States chose not to attend, and that they were followed by other democracies including Poland, Germany, the Netherlands, Italy, Canada, Australia and New Zealand. 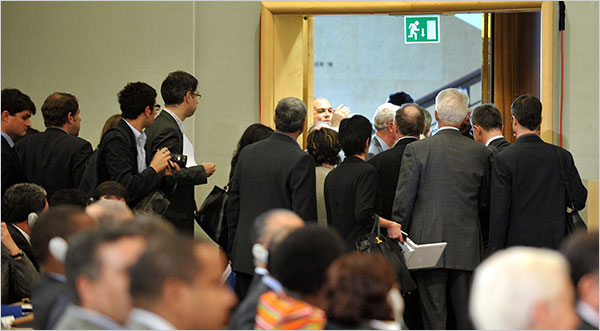 I am also delighted that those democracies which have attended — including the United Kingdom — chose to walk out shortly after the Iranian president began his speech.
Watching all those delegates get up out of their seats, walking with determination toward the doors, in one case waving a fist at the Iranian dictator, I could not help but feel delighted.
This is what the real struggle against racism looks like.

2 Comments on "This is what combatting racism looks like"