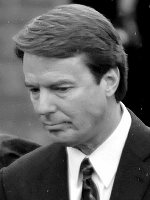 John Edwards was once the shining hope of American progressives; today, he’s a disgraced former politician. Last week, his trial in federal court ended with an acquittal. The trial, and the public reaction to it, showed yet again a very ugly side to American politics and culture.

While it may seem ancient history to Americans, it was only four years ago that John Edwards ran for the Democratic nomination for President on a moderately social democratic platform. This put him far to the left of the two front runners, Hillary Clinton and Barack Obama. When the health care plans of the three candidates were compared, it was obvious that only Edwards was committed to genuine reform — and Obama came in with the least ambitious plan of all.

Edwards focussed his 2008 campaign on the notion of “two Americas”, a phrase perhaps first used by James P. Cannon in his 1948 speech to the Socialist Workers Party convention.

As Cannon said at the time, “there are two Americas — and millions of the people already distinguish between them. One is the America of the imperialist … There is the other America — the America of the workers and farmers and the ‘little people’.”

American socialist writer Michael Harrington later used the phrase “the other America” as the title of his seminal book on poverty, written at a time when everyone else was talking about “the affluent society.”

Edwards probably never even heard of Cannon, but he may well have been influenced by Michael Harrington. His campaign chose to focus on the issue of poverty in America — and it resonated in the working class and on parts of the left. Unions like the United Steel Workers decided early on to throw their weight behind the Edwards candidacy.

Edwards performed well in the Iowa caucuses, but suddenly pulled out of the race very early on, on the eve of the Super Tuesday primaries.

We now know why: he had had an affair, the woman became pregnant, and hostile media had uncovered the story.

The story was made all the more scandalous by the fact that Edwards’ wife, Elizabeth, had been diagnosed with terminal cancer. (She has since passed away.)

Edwards’ withdrawal from the race left the Democrats with a choice between two centrist candidates, and rest is history. Where Obama failed — with a very weak and limited reform of health care, and a complete failure to reform labour laws — Edwards would have done well.

Fast forward to 2012. Federal prosecutors decided to punish Edwards for his sins, and discovered that a 102-year-old millionairess named “Bunny” Mellon had paid to cover up the 2008 scandal. This, they believed, was a federal crime. Edwards had misappropriated campaign funds.

The case cost the taxpayer millions, dragged on for months, and last week the jury ruled that Edwards was not guilty of one of the six charges and couldn’t reach a consensus on the others. The judge declared a mistrial.

The reaction of nearly everyone was to declare that while the trial was clearly a massive waste of money and time, Edwards was, of course, a rotten scumbag.

The fact that his and Elizabeth’s children stood by him carried no weight. The man, it was agreed by all, was something of a moral monster.

A liberal columnist wrote a piece for the New York Times pointing out just how vacuous Edwards was — triggering hundreds of comments which revealed a consensus that Edwards was somehow less than human, and was certainly a moral criminal of the worst kind.

All this to me stinks of hypocrisy — the rank kind of hypocrisy that makes America such a problematic place for the left.

What should have been a private matter between John and Elizabeth Edwards has become the concern of all, and everyone has an opinion.

Nothing about Edwards seems relevant anymore except his adultery. He has committed a mortal sin. As if he was the only American to have ever done this.

This notion of morality is almost medieval — and is part of the hypocritical morality in America that makes it so hard to legalise gay marriage or safeguard abortion rights.

Some politicians — such as the saintly John Kennedy, or the slightly-less-saintly Bill Clinton, can get away with it. Some can’t. One wonders if part of the reason for the virulent hatred of Edwards is related somehow to his politics.

After all, the American Right detested Bill Clinton, despite his decidedly middle-of-the-road liberalism. They hated John Edwards all the more, as his ideas — in an American context — smelled of something far more left-wing.

I write none of this to excuse any mistakes Edwards made. And in making those mistakes, he set the causes he campaigned for, such as fighting poverty, back by years.

But we on the Left should never allow ourselves to be among those currently howling for John Edwards’ blood. Their notion of morality and ours have nothing in common.