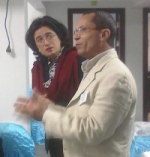 I visited Egypt last week as the guest of the Center for Trade Union Rights and Workers’ Services which is celebrating its 20th anniversary.

They were holding an international seminar on organizing and collective bargaining, which might not sound all that exciting in some countries, but is explosive material in Egypt.

Egypt is basically an authoritarian, single-party state which doesn’t tolerate independent trade unions.  Millions of Egyptian workers employed by the public sector are compelled to pay dues to state-controlled unions which do little or nothing to represent.  The rest are simply exploited — but sometimes, they rise up in anger.  Recently the country has witnessed months of labour unrest.

All of which reminds me of Poland back in 1980.

Egypt is by far the largest Arab country with nearly 80 million citizens, and its system of labour relations is not very different from the others.  Most Arab countries barely tolerate trade unions, some outlaw them completely and others create state-controlled labour fronts.

Iraq is at the beginning of a process that may end up with independent, democratic unions free of state control.

But Egypt is the Jupiter in the Arab world’s solar system. It is immense. What happens in Egypt will affect the entire region.  And what is happening is extraordinary.

Since the revolution of 1952 which overthrew the monarchy, Egypt has had only three leaders.  Mubarak has been the country’s unchallenged ruler for nearly thirty of those years.  He has anointed his son as his successor and currently suffers from ill health.

Mubarak has presided over the dismantling of Egypt’s large public sector, caving in to IMF and World Bank demands that the country liberalize and make its labour market more flexible.

The result is the gradual elimination of most forms of social protection, including the decline of the official state-controlled unions, which have no base in the growing private sector.

I arrived in Egypt to find a country experiencing the biggest wave of labour unrest in a generation.

The struggle of the municipal real estate tax collectors was a historic one, culminating not only in massive wage gains for these public sector workers, but in the establishment of Egypt’s first (and so far only) recognized independent trade union, with tens of thousands of members.

We learned about the struggles of others in schools and in the giant spinning and weaving industries to form unions, about the repression, arrests, and crackdowns.

As someone who wrote about the rise of independent, democratic trade unionism in Poland in 1980 for a left-wing newspaper in the U.S., I was struck by similarities.

Even the complication of religion has its parallels (the Muslim Brotherhood in Egypt, some reactionary elements of the Catholic church in Poland).

And I was also struck by the Egyptian workers’ acute awareness of the importance of international solidarity.

The seminar was attended by trade unionists from the USA, the Netherlands, Spain, France, and Palestine, as well as the International Trade Union Confederation and PSI, the global union for public sector workers.  It is significant that LabourStart was also invited to participate.  The International Labor Organization was mentioned many times, and its regional representative participated as well.

The CTUWS has itself suffered severe repression in recent years and international campaigns have been crucial in getting the Egyptian authorities to back down.

As the strike wave intensifies, as more and more workers try to follow the example of the success of the real estate tax collectors and demand recognition for their independent unions, we can expect more repression as well.

The old regime in Egypt is dying, just like President Mubarak seems to be on his last legs.

There is always the risk that his death will trigger a panicked reaction by the Egyptian ruling class — something like the martial law imposed by the tottering Communist regime in Poland in 1981.

What happens in Egypt affects the entire region, and therefore the world.  The struggle of the Egyptian workers for their basic rights should be the concern of trade unions around the world.

As I sat in the conference hall in Cairo, listening to workers describing their struggles in the factories, and mills, and offices, I couldn’t help but think about the workers in the shipyards of Gdansk.  And I wondered which one of these these men and women might be Egypt’s Lech Walesa.

For more information about the struggle of the Egyptian working class, check out LabourStart’s new Egyptian news page