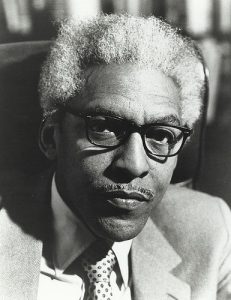 Bayard Rustin, civil rights leader and organizer of the March on Washington.

In the mid-1960s, not long after the March on Washington, the organizer of that historic protest, Bayard Rustin, wrote an article. It was called “From protest to politics”. Rustin argued that the civil rights movement had entered a new phase, and while not rejecting the tactics of street protest, Rustin argued for taking electoral politics and coalition building much more seriously.

The morning after Hillary Clinton accepted the Democratic nomination, we in the Sanders movement (and it is a movement) also have to consider what it means to make the transition from protest to politics.

Many of us understand that we need to do this, that everything depends on stopping Trump who represents a threat on a scale we’ve not seen before. For that reason I and probably 90% of Sanders supporters (according to polls) will support Clinton. And not only vote for her — we will work for her, donate money to her campaign, and make the case to our fellow Berners that we do need to unite behind her.

Having said that, I want to say a few words to my friends in the Democratic Party who have been supporting Hillary Clinton all along.

This is not an easy or simple process for us. One does not transition from being a revolutionary to being a mainstream politician overnight. We have developed habits over the course of the last year (and longer) of ferocious attacks on a corrupt political system dominated by big money. Those attacks and that critique retain their validity.

One does not simply “pivot” away from all that.

I thought of this last night when one of the many, many speakers praising Clinton and denouncing Trump demanded that Trump release his tax returns. The crowd cheered wildly. Of course Trump should do that. The speaker was asking what Trump is trying to hide, which is a fair point.

But I could not help thinking of our campaign’s demand that Clinton release the texts of her highly-paid speeches to the bankers at Goldman Sachs. Was it wrong of us to demand that? I don’t think so.

And there were ugly moments last night that maybe didn’t make it to mainstream television news. At various points, some Sanders delegates broke into the chant “No more war!”. Particularly when a general from US Marine Corps was speaking. Yes, we should show respect to invited speakers. And yes, leftists no less than rightists honor men and women who serve their country. And yet there is also a strong tradition on the left of opposition to war. It is a noble tradition and I respect that too.

The Clinton supporters responded by drowning out the anti-war protestors with chants of “USA! USA!” while waving the thousands of American flags which had been distributed. This was not spontaneous; the Clinton campaign organized the counter-protests in advance, telling delegates what to shout if the Sanders delegates raised their voices. If we shout “No more war!” they shout back “Hillary! Hillary!”

It reminded me of the cultural clashes of the late 1960s when protestors holding Viet Cong flags battled with pro-war demonstrators waving the stars and stripes. It was ugly then and it’s ugly now.

The young Berners are being asked to transform themselves from protestors to politicians, to stop chanting “Feel the Bern” and start chanting “Hillary! Hillary!” — as if this were somehow an easy thing to do. It isn’t.

Which brings me back to last night in Philadelphia.

I sat there for nearly 8 hours listening to speaker after speaker give unqualified praise to Hillary Clinton, to not even acknowledge the possibility that one might offer critical support. I guess that’s how conventions are, and I don’t want to sound naive. The last speaker I heard was Chelsea Clinton. To the great surprise of no one, it turns out that she loves her mom. Just like Donald Trump’s daughter told the world that she loves her dad. That’s what American politics has been reduced to.

And then the video began. I heard the voice of Morgan Freeman — who else? — telling Hillary Clinton’s life story, as I sat there with my delegation, surrounded by a sea of flags, USA placards, and people ready to shout down any voice of dissent.

And at that moment I felt — I cannot do this. Not tonight, not now.

I left the hall and walked alone in the gentle rain to the subway station. Said goodnight to the Philadelphia cops and Secret Service agents who were everywhere, and thanked a couple for being there.

Yes, we have to make the move from protest to politics. But please do not underestimate what a difficult move that is for so many of us.