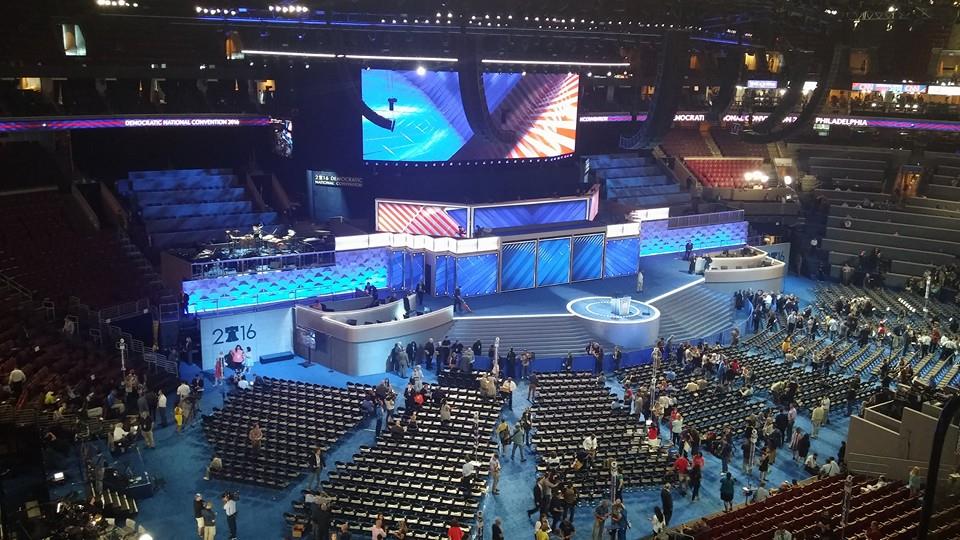 The calm before the storm. Hurricane Bernie is coming.

The Democratic National Convention opens in just a few minutes; I am sitting in the hall, looking down on the delegates and the stage.  People are slowly coming into the hall.  This place has the feeling of the calm before the storm.  And this storm has a name: Hurricane Bernie.

Anyway who thought that there would be an orderly transition from insurgent campaign to team players was sorely mistaken.  Senator Sanders may be convinced of the need to unify the party around presumptive nominee Hillary Clinton.  But many of his supporters do not share that view.

According to news reports, the appearance of disgraced former DNC chair Debbie Wasserman-Schultz at the Florida delegation breakfast triggered boos and shouting.

Some traditional Democratic activists who were there told news media that they were shocked — shocked — at the behavior of the Sanders delegates.

The meeting of the enormous California delegation apparently also disintegrated into shouting matches.  Not even the respected Democrat Nancy Pelosi was spared.

In the streets of Philadelphia, there are thousands of Berners carrying around “Bernie or Bust” signs.  In the Pennsylvania Convention Center, Bernie’s meeting with delegates attracted thousands of people some of whom, like me, were turned away.

But even there, as one eyewitness told me, there was little patience for Bernie’s attempt to show some support for Hillary Clinton and unify the party.

The DNC and Clinton have been incredibly inept at their handling of the Sanders supporters.  They appear to be taking them for granted, assuming that they have nowhere else to go.  After all, it’s either vote Clinton or get Trump.

And yet — people are angry.

This evening Bernie will address the convention and the world.  I am looking out over a sea of journalists; there are several thousand here.  Sanders speech will be transmitted live and millions will hear him speak in real time, many for the first time.

It now seems clear that his message will be one of continuing the revolution, but will also call for support for Clinton.

Sanders’ supporters will almost certainly welcome him with a standing ovation.  But they may interrupt him if he says anything positive at all about Clinton.

They are an unruly crowd, undisciplined, under no one’s control. They cannot be managed or dictated to.  They must be treated with respect.

And above all, they must be listened to.

They want to be heard.  And tonight, they will be heard.