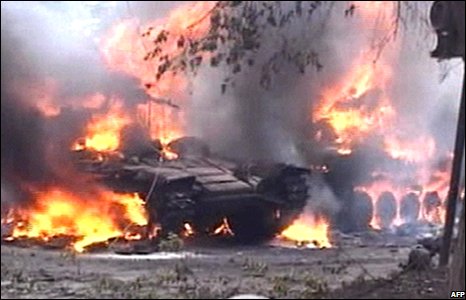 As a democratic socialist, I have to say that I am very concerned by reports that Russian tanks have entered Georgia.
You might think — what an odd topic to comment on? After all, I don’t normally address current affairs issues on this blog.
But a quarter century ago I began a love affair with Georgia — a country I’ve never seen whose language I do not understand.

I fell in love with the country because of something that happened 90 years ago.
Back in 1917, when the Russian empire collapsed, a number of the border regions were spun off and allowed to become independent. In some cases, like Finland, the independence was permanent. In others — like the Transcaucasian republics of Armenia, Georgia and Azerbaijan, it was more transient. By 1921, all three were back under Russian rule.
The case of Georgia intrigued me because it was the only part of the Russian Empire in which the Mensheviks came to power — and held power.
The society they established was a multi-party democracy with a free press. Independent trade unions thrived. The “commanding heights of the economy” were nationalized. Peasants were given control of their land. It was not a perfect society, and Georgia lived under constant threat of invasion — from the Russians, the Turks and others. The Georgians sought safety in the embrace of greater powers, first Germany, later Britain.
The more I read about the independent Georgian republic, the more I understood the enthusiasm shown by democratic socialists at that time for this new society. Side by side with the Leninist-Stalinist regime in Russia, which established its secret police force and Gulag at the very dawn of the revolution, here was an example of an alternative form of socialism, one with a human face.
In the spring of 1921, Stalin — himself a Georgian, but an outsider — organized a Red Army invasion of the country and brought it under Russian rule. For many years, it was a difficult country for the Russians to control. At one point, in 1924, the underground Menshevik party carried out a large armed insurrection, nearly ending Soviet rule then and there.
For decades, socialist and labour parties in the West knew about the Georgian experiment and honored Georgian socialist leaders in exile.
But historical memory fades over time, and few socialists today have any recollection of this extraordinary experiment in democratic socialism.
The Mensheviks are long gone, though Georgia does honor the memory of its brief independence from 1918-1921.
As I read of Russian tanks pouring across the Georgian border, once again the great power to the north putting pressure on its little neighbor, I feel sad that there is no longer the kind of sympathy on the Left for Georgia that there once was.
Of course we should oppose a Russian invasion of Georgia; that goes without saying.
But we should not only oppose it because countries should not invade one another.
We should also oppose it because it reminds us of one of Stalin’s first great crimes, the crushing of what was at the time a great hope.
Independent Georgia did not deserve that fate in 1921 and Georgia does not deserve that now.
Hands off Georgia!

4 Comments on "Hands off Georgia!"