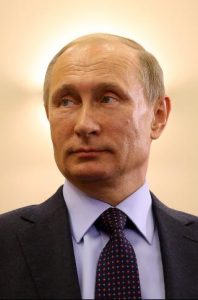 A few years after the second world war, a strange book was published in New York City.  It was called The Russian Menace to Europe and judging by the title, one would imagine it was one of many books which focussed public attention on the threat posed by the emerging Soviet superpower.

The book’s authors, however, were Karl Marx and Friedrich Engels.

It was a collection of essays, mostly newspaper articles, written by Marx and Engels in the 19th century.  The Russia they were concerned about was not the Soviet Union, but the tsarist empire.

And yet there were very strong parallels between the two periods, a point Marx himself made (without knowing the future) when he described the unchanging character of Russian foreign policy.

Marx was especially concerned with the way Russia manipulated Western leaders, especially certain British politicians such as Lord Palmerston.  Palmerston’s actions during the Crimean War seemed to benefit Russia so often that Marx was convinced he was the tsar’s agent.

The idea back in the 1950s that Communist Russia and tsarist Russia had so much in common was quite daring.  Today, the idea that Putin’s Russia continues historic patterns stretching back centuries seems less controversial.

In 2008, he brazenly launched a war on Georgia, an independent country to Russia’s south.  He continues to occupy two Georgian provinces with Russian troops.  A few years later, his soldiers seized control of Crimea from Ukraine. And then they triggered a civil war in eastern Ukraine, causing thousands of deaths.

Putin’s 21st century Russian imperialism has its foreign policy too and just like the tsars and the Communists, it seeks to influence Western politicians and public opinion.

In the American elections, the Russians are playing both sides with a considerable measure of success.  The relationship between Putin and Trump is an increasingly transparent one.  Trump has long expressed his admiration for Putin.  And yesterday, he stunned the political world in America by publicly calling on the Russians to release some 30,000 deleted emails from Hillary Clinton’s server which they may have hacked.

But it is not only the far-right Republicans that Putin seeks to influence and control.  For several years now, Putin’s satellite TV news channel Russia Today has tried to influence public opinion in the West by pretending to offer an alternative view of the world.  It is has had a certain limited success.

I spent yesterday not at the Democratic National Convention but at alternative events hosted by both democratic socialist groups and the far Left here in Philadelphia.  Green Party presidential candidate Dr Jill Stein spoke at one of them.  In a packed, airless and extremely hot hall, I saw a number of participants wearing “Hillary for Prison” t-shirts.  It seemed to strike no one as odd that Donald Trump’s slogan had a place at a left-wing meeting.

I imagine that most of the people in the room would broadly accept the world-view espoused by Russia Today — that the United States is the cause of global instability, that Russia threatens no one, and so on.  These views are certainly reflected in the platform of the Green Party.

So we find in America a century and a half after Marx and Engels wrote their essays that on both political fringes, right and left, the influence of the Russian state is clearly felt.  Obviously it is Donald Trump, and not Jill Stein, who needs to worry us.  But both are part of the same broad current who distrust American foreign policy, demonize Hillary Clinton, and have no problem with the autocrat in the Kremlin.

Those groups and individuals, whether they support the Tea Party or are self-styled Communists, are the members of Putin’s Party.