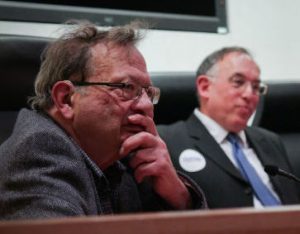 Larry Sanders and Eric Lee at a campaign event in London.

I have just left the Global Convention of Democrats Abroad here in Berlin where I represented Senator Bernie Sanders.

I was not a delegate, or elector, and hold no office in Democrats Abroad. But I was there to ensure that the best possible delegation was elected to represent our political revolution and I’m pleased with the results.

Not only did we manage to get Bernie’s brother Larry Sanders elected to the first position with nearly unanimous support, but we elected a whole team of excellent campaigners and activists. I’m particularly proud of the election of two women, one an old friend (Penny Schantz) and the other who was one of the key volunteers in London for Bernie (Kari Mosleh). I am sorry that of the 211 people who proposed themselves to be Sanders delegates from Democrats Abroad, only 9 will be going to Philadelphia in July to represent our campaign.

Among those 202 disappointed people I now have to count myself. This morning I was defeated in voting to be an alternate.

I won’t go into all the gory detail of what happened, except to say this.

Inside the Sanders Presidential Preference Group which I attended, I saw candidates rise to make their case, talking about themselves, or what they did for the campaign, or their political vision. I did not see people rising to attack other candidates, to question their integrity or make accusations against them.

Except in one case.

Over the course of the last several days, I was repeatedly accused, publicly and in private conversations, from the floor and in the corridors, of the worst possible crime.

That crime was denying the existing leadership of Democrats Abroad, meaning the people who gathered together in Berlin this week, the right to choose the 9 people who would go to represent the 24,000 people who voted for Bernie Sanders in the Global Presidential Primary.

In the Delegate Selection Plan drafted by Democrats Abroad, campaigns are given the right to review the lists of self-nominated candidates, and to submit a shortlist. The campaign is obligated to submit at least two names for every open position so that in the end, the leaders of Democrats Abroad still get a say in the matter.

Instead of submitting the minimum requirement of 18 names, we submitted 34. It goes without saying that many people were disappointed not to be included on that list.

Anticipating that, I wrote to everyone who had submitted their names, explaining what we had done and why.

I’m pleased to say that I received many emails thanking me for my transparency and fairness. I did not hear a single complaint from the self-nominated candidates who were excluded from the shortlist.

That shortlist met the requirement for gender balance, and 60% of the names on it met the affirmative action criteria as well. It included young and old people, Democrats Abroad veterans and people who have never been active in the organization.

Our idea was to ensure that some of the latter group, newcomers who the existing leaders of Democrats Abroad would not know, would go as delegates to Philadelphia. Their chances were increased because of the shortlist.

And as Larry Sanders just told the participants in the convention this morning, that is what is normally done in political organizations, and is particularly needed by insurgent campaigns like ours.

Unfortunately, not everyone in Democrats Abroad shared that view, and some began spreading rumors which had no basis in fact, and which served to cast the campaign in general and me in particular in the worst possible light.

Those attacks began well before we gathered in Berlin and picked up steam over the last few days despite our best efforts to clear the air.

They reached a peak this morning when the time came for the small number of electors who showed up for an early morning session to vote in the final round for an alternate.

I was given an opportunity for speak for one minute, and used it to say what I’d done for the campaign.

The winning candidate also had a minute and used all of it to denounce me for being involved in the creation of a shortlist of candidates.

And in the midst of all this nastiness, several people worked very hard openly and behind the scenes to clear up the rumors and encourage people to vote for me. In particular I want to thank Larry Sanders, Penny Schantz, Travis Mooney, Rob and Sanja Carolina. Your support and friendship have gotten me through a difficult few days.

In the end, the delegation we are sending of Sanders supporters to Philadelphia is a good one and I’m proud to have played a role in ensuring that happened. I’m even more proud of having played a role in mobilizing thousands of people in London and around the world since June 2015, winning a spectacular victory in the Global Presidential Primary in March this year.

I expect to be in Philadelphia for the convention in one capacity or another, and look forward to meeting many of you there.

The old politics may have won a small victory in Berlin this morning. As Bernie Sanders constantly reminds us, it is a rigged system.

But I am confident that we are strong and we are growing, and the political revolution Bernie speaks about is a reality.