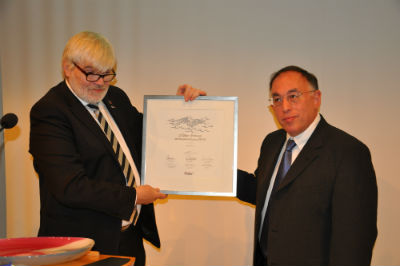 It is a great honour to be here today and to receive the Arthur Svensson International Prize for Trade Union Rights on behalf of LabourStart. I want to thank the union Industri Energi for awarding the Prize to us this year.

It is truly humbling to read the names of winners in previous years. The people and organisations you have selected represent the very best of the trade union movement, people who are often on the front lines of the fight for democracy and social justice.

In previous years the focus of the prize has been on individuals and unions which have taken great risks and sometimes suffered enormously for the “crime” of defending workers’ rights.

Mahdi Abu Dheeb, who together with Jalila al-Salman, was jailed and tortured by a government which was willing to go to enormous lengths to prevent the spread of the “Arab Spring” to Bahrain.

Napoléon Gómez, the leader of Los Mineros in Mexico, a victim of repression and death threats who is forced to live in exile from his country.

Russian trade union leader Valentin Urusov, jailed on fabricated charges when his real crime was to stand up for workers.

We who campaign in support of people like Mahdi, Napoleon and Valentin here in places like Oslo and London take few personal risks in doing so.

We are unlikely to be jailed and tortured, or shot at or forced into exile.

We live in countries with strong trade union movements, with a democratic tradition where human rights are largely respected.

We are not on the front lines in the way that our brothers and sisters in Bahrain, Mexico or Russia are.

And yet, the role we play in building global solidarity and in particular with our online campaigns, is critical.

LabourStart was founded 18 years ago, a time when few trade unions fully grasped the importance of the internet.

Today, I think that pretty much everyone understands that the Internet has changed completely how we organize, how we campaign, how we fight.

But LabourStart, from the very beginning, this was not just about the technology.

At first, we struggled to be heard.

But over the years, what we offer to the international trade union movement is increasingly understood and valued.

When it comes to campaigning in defense of workers rights we bring two things to the table: a platform and a network.

The platform is the web-based ActNOW system, which is a bespoke system we use to make it easy for trade unionists working in any language to support our campaigns.

The network is at its core a mailing list of just under 137,000 names and addresses of trade unionists who are prepared to support our campaigns. 88,000 of them are on our English list and the other 49,000 on dozens of other lists in all the major and several minor languages.

So how does it work?

Unions come to us with problems and we offer solutions.

For a number of reasons we work mostly with the global union federations and the International Trade Union Confederation. But we also work with national trade union centres, national unions, and in some cases, even local unions and pro-union NGOs.

Those organisations come to us with issues like an employer who has sacked union officials for doing their jobs, or a government which has jailed union leaders, or — in the worst case scenario — cases where trade unionists have lost their lives and the demand is simple justice.

Working together with our union partners, we figure out what the message of the campaign needs to be, who the target of our messages will be, and how we can achieve our goal.

Once this is all agreed upon, we put the campaign online and begin translating it. Typically, a campaign will appear in 15 – 20 languages, all the translations done by volunteers.

Anyone visiting LabourStart’s website will learn about the campaign, and it will appear on many other union websites automatically. We make sure it gets known on Facebook, Twitter, LinkedIn and other social networks.

And if that’s all we do, the campaign will be a failure and very few people will know about it.

We have learned over the years that the only effective way to get the word out about these campaigns is email.

Email, that old, low-tech, boring communications tool turns out to be the killer app of online campaigning.

When we launch a campaign targetting a company or government, within minutes of our email message going out, the first few hundred messages of protest will have been delivered.

Within a day, we could be looking at 5,000 or more messages.

Never before in the long history of the international trade union movement have we had a tool like this.

That’s great, you may be thinking, but does it work? Do sacked trade unionists get their jobs back? Do jailed union leaders get released? Is anyone listening to our protests?

The answer is yes, sometimes. Not all the time. There is no guarantee that a campaign will work. But our campaigns succeed often enough that we actually published a short book a couple of years ago called Campaigning Online and Winning where we talked about dozens of successful LabourStart campaigns.

It’s probably time to do an updated version of that book — and to translate it into Norwegian.

And I should say a word about what we mean by winning.

We don’t mean “sending a lot of protest messages”. I don’t care if we send 1,000 messages or 20,000 messages — what matters is only this: did we get the result we were looking for?

There are campaigns we have won with very few messages sent. And campaigns we’ve lost despite having mobilized very large numbers of people.

That doesn’t mean numbers don’t matter. They do. It certainly helps to have more people involved in a campaign.

But other factors play a role as well.

The central one is the role played by people on the ground. We win campaigns when the workers on the ground, the ones we are fighting for and with, show determination and grit.

The courage of so many of the workers we campaign with is truly inspiring. Our role is clearly secondary — it is their heroic struggle that wins the day.

Which brings me here today, speaking to you in Oslo at this wonderful event.

I want to speak about your role, the role of Norwegian trade unionists in the work we do at LabourStart.

More than a decade ago, Espen Loken launched the Norwegian version of LabourStart. It was one of our very first versions in a language other than English and it flourished. We tapped into a couple of things that made it a success.

First of all, Norwegian trade unionists have been using computers and the Internet for a long time. So it was relatively easy, even some years ago, to reach large numbers of workers in this country using the Internet.

And second, we tapped into a long and proud history of international solidarity in the Norwegian labour movement. On one of my visits to Oslo — I think it was my last one — I was invited by one of your unions to speak at a full-day event on international solidarity. It was part of the union’s regular congress. I can’t imagine unions in most countries doing that sort of thing, and giving international work such prominence.

As a result of our work here in Norway, we now have 2,700 trade unionists from your country on our mailing list. Every campaign we do is quickly translated into Norwegian and every mass mailing goes out to those 2,700 people.

I’m tempted to say, thanks very much. If only we had such a large group of committed trade unionists in every country.

And yet — we could do better.

The unions affiliated to the LO claim 900,000 members. YS claims 220,000 members. These are extraordinarily high numbers considering that Norway only has about five million people.

But it also tells me that the potential for LabourStart here is much greater than the 2,700 people we currently talk to and who are involved in our campaigns.

Our most successful campaign at the moment in Norway is one demanding justice for the murdered Italian researcher Giulio Regeni, who was killed in Egypt while doing research into independent trade unionism.

That campaign got the support of 185 people in Norway. Which means that over 2,500 Norwegian trade unionists who are on our mailing list have not yet supported the campaign. And another million or so organized workers in Norway, members of trade unions here, have probably never heard of the campaign.

Imagine if our mailing list consisted of, say, 10% of the members of Norwegian unions. The 10% who care the most about international solidarity.

Is that overly ambitious?

I don’t think so.

When we started LabourStart back in March, 1998, there was no staff, no network, no resources. It was just an idea.

It grew slowly, year on year, and today we have the capacity to rapidly deliver thousands of messages of protest by email to targetted governments and employers.

But we can do so much more.

Our global solidarity conferences — the most recent ones were in Toronto, Berlin, Sydney and Istanbul — show that we can also work outside of cyberspace.

I think we’ve made great progress, and we’ve won some inspiring victories, but I’m not content and not resting on our laurels.

Looking back at the last 18 years, seeing what’s been achieved and how far we’ve come, my conclusion is a simple one.

This is only the beginning. Now, let’s start the real work.