This is the speech I gave today in Trafalgar Square at the demonstration in support of Kobane — part of an international day of action.

I have been asked to speak with you today about the support trade unions are showing for the heroic people of Kobane.

We are all inspired by the steadfast resistance shown by the people of Kobane, men and women, working people like ourselves.

We must be clear about our language here: Islamic State is a fascist organization and the fighters in Kobane are on the front lines of the fight against fascism in our time.

They are fighting with great heroism and determination and I am confident that they will win.

This is a fight that the international trade union movement needs to support.

It is our fight too. 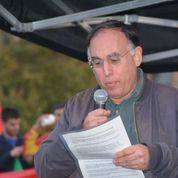 But we are not doing enough.

The British and international trade union movements have the moral responsibility to come to the defense of the heroic fighters in Kobane.

In the past, the trade union movement has known what it needs to do.

Eight decades ago, when fascists were besieging Madrid, trade unionists were on the front lines — literally — in the fight. The entire international working class movement, Communists and Socialists alike, were inspired by the slogan “No pasaran!” — “They shall not pass!”

Today it is the responsibility of trade unionists to once again throw our full support behind a people standing up to a fascist onslaught.

It is not enough to issue a press release.

It is not enough to pass a resolution in a trade union branch.

Comrades and friends, brothers and sisters, we must do more.

The TUC must take the lead and mobilize British workers in acts of solidarity, including bringing thousands of them into the streets to rallies like this one.

The International Trade Union Confederation and the global union federations must do the same at global level.

In the 1930s, we were not strong enough and we were unable to stop the fascists from taking Madrid.

That victory for Franco, Hitler and Mussolini must not be repeated today.

Kobane must not be allowed to fall.

They shall not pass! No pasaran!

5 Comments on "They shall not pass!"