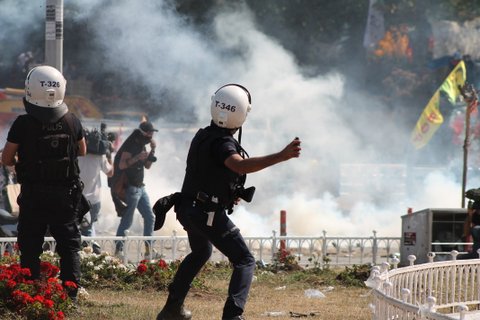 This article appeared in Solidarity and Talking Union.

I was talking the other day to an educated and informed American and mentioned that I’d spent a lot of time recently working on building support for the protestors in Taksim Square.

Her reaction surprised me.

“But aren’t you worried about, you know, an Islamist takeover?”

In the two years since the overthrow of the Mubarak Regime, many people have begun to learn all the wrong lessons from the Arab Spring.

The fear that reactionary Islamists in Syria might hijack the revolution is a genuine one.

But in Turkey, it’s the Islamists in power and secular, modern Turkey is in the streets and squares.

There is a widely-held belief that the “Arab Spring” was a failure, that the hopes it awakened have been dashed, that it was all a huge disappointment.

This is a belief that we must challenge, especially if we are to build support for the Turkish uprising and others to follow.

Let’s start by dealing with the disappointment with the Egyptian revolution and all that it promised.

It’s not true that one dictatorship was replaced by another, or that nothing has changed on the ground.

Independent trade unions have emerged, held congresses, and organised workers – something that would not have been tolerated in Mubarak’s Egypt.

Morsi and his Muslim Brotherhood may not be the leaders we’d have chosen, but they were chosen in multi-party elections and so far have avoided imposing the kind of Islamist dictatorship that some feared.

What’s happened in Egypt, Tunisia and elsewhere is that the civil war in the Muslim world – a war between authoritarians and democrats, reactionaries and progressives, Islamists and secularists – is still raging, but these days it is a somewhat fairer fight.

And in that civil war, there are of course grey areas like Syria where it can be hard to tell who the good guys are.

But that’s not the case in other countries, such as Iran or Turkey, where popular uprisings have assumed a democratic and secular character.

Democrats, socialists and trade unionists have been engaged for years with the Egyptian, Turkish and Iranian oppositions and one result is that there are strong forces in those countries with whom we can identify.

We knew Kamal Abbas and the Centre for Trade Union and Worker Services (CTUWS) in Egypt long before Mubarak fell. We’ve supported the Tehran bus drivers and other independent trade unions that have challenged the regime in Iran. In Turkey, national trade union centres like DISK and KESK – now leading the movements in the streets – have long been our friends and allies.

It was much harder to make contact with Syrian or Libyan oppositionists, in part because of the brutally authoritarian characters of the Assad and Gadaffi regimes.

Our main role remains to support our comrades in Taksim Square and across Turkey, as well as democrats, secularists, trade unionists and socialists in Iran, Egypt and elsewhere.

But we also have a message for those now challenging the rule of Erdogan, Morsi and Khamenei.

It is not enough to replace these regimes with new leaders – it is also important to challenge the ideology of those being replaced.

The Islamist regimes are based on lies, as were regimes like Mubarak’s, and those lies included racist propaganda targetting Kurds, Jews and others. Those regimes are also anti-women and homophobic, as were their predecessors.

Socialists must be calling for self-determination for all peoples in the region. (This includes defending Israel’s right to exist.) We must be putting the rights of women and gay people in the forefront of these struggles.

Of all the movements represented today in Taksim Square, and two years ago in Tahrir Square, only the workers organized in independent and democratic trade unions can be counted to push the revolution forward – and to realise the dream of a Middle Eastern Spring.