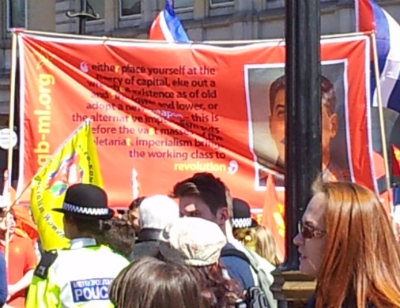 This article appears in Solidarity.  Feel free to add your comments below.

It was a beautiful May morning, one of the first warm and sunny days we’ve had all year. In Clerkenwell Green, hundreds of people were assembling for the annual official London May Day march. Many of you will not have been there — in fact there were very few trade unionists at all on this year’s march.

So let me tell you who was there — the twentieth century’s greatest serial killer, Joseph Stalin. Stalin was on several banners, and not only his image side by side with Lenin and Mao, but huge banners just with his picture alone — and quotations from his writings.

As I marched along with some trade union leaders and a traditional brass band, I could not help feeling ashamed at what the march would have looked like to onlookers, of whom there were many along the route. Ashamed and disgusted.

It’s disgusting because holding aloft iconic images of Stalin at a trade union march shows a complete lack of moral judgement. Seventy years ago, it may have been understandable — the second world war was raging, the Soviet leadership had not yet acknowledged Stalin’s crimes. But after 1956, anyone who still believed that Stalin was a great revolutionary leader was delusional.

Many of the marchers holding hammer-and-sickle flags or Stalin images would have been from various far-Left Turkish organizations and maybe in Turkey, there is no strong anti-Stalinist left. (Not that that’s an excuse for their igorance.)

But there were also British far-Leftists, supporters of tiny fringe groups proud of their adulation for a man who is responsible for millions of deaths of innocent people, a man who contributed so much to destroying everything the Russian revolution had achieved, killing off the entire Bolshevik party in the process.

The British anti-Stalinist Left was represented by “Trotskyist” groups like the Socialist Workers Party and Socialist Party, who were there in strength, manning their book stalls, selling their newspapers. But there was no evidence that they challenged the Stalinists or even politely asked them to put their repulsive banners away. It seemed as if the Trotskyists and Stalinists were happy to march side by side, letting bygones be bygones. No enemies on the left and all that.

This in intolerable. If there are some, few individuals with personal “issues” who need to express themselves through things like the “Stalin Society”, that may be their right. But that doesn’t mean that they are welcome at our May Day celebrations. They are not welcome.

We must make an effort to ensure that this disgrace never repeats itself and that in 2014, there will be no banners with Stalin’s picture at the London May Day march and rally.

How do we do this? We begin by debating and confronting the Stalinist Left, demolishing their arguments and educating their members and periphery. We fight them on their turf and we fight them seriously. This is a fight over historical memory, over truth, and it is a fight we must win in order to cleanse and revitalise the Left.

At our own events such as a May Day march, we must take a firm stand of no platform for totalitarianism — no portraits of Stalin, Mao, Pol Pot or Kim Jon Il to be displayed. Enough is enough.

And finally, we must compell the leadership of the TUC and the unions to take May Day seriously. They must wrest it from the hands of the lunatics and the fringe. They must bring the hundreds of thousands of trade unionists who have marched under the TUC banner in recent years to come out on May Day too. The trade union leadership must help us to reclaim the holiday.

Stalin’s portrait must never again be paraded through the streets of London.

6 Comments on "Stalin in Clerkenwell Green"