The Bernie Sanders campaign for the Democratic presidential nomination is probably the most exciting development in US politics since the 1930s. And it’s not a coincidence that both the resurgent left of that decade and the Sanders phenomenon have followed the spectacular economic crashes of 1929 and 2008. 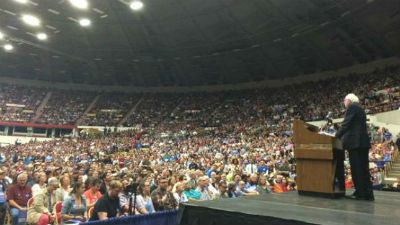 The Sanders campaign is a phenomenon. He’s not only rising rapidly in the polls, posing a clear threat to Hillary Clinton, but he’s raising millions of dollars in small donations and filling arenas with supporters – including in some surprising places, like Phoenix, Arizona.

A self-described democratic socialist and a former member of the Young Peoples Socialist League (YPSL), Sanders was influenced by an early visit to a kibbutz in Israel in the 1960s, and by the model of Scandinavian social democracy. He’s proposed a number of radical reforms that put him far to the left not only of any other mainstream presidential candidate this year, but to the left of anyone in living memory.

There’s not been a campaign like this since Norman Thomas led the Socialist Party to its second-best result ever in 1932, polling just under 900,000 votes. (The Communist Party back then polled only a fraction of the Socialist vote.)

But there’s a problem with Sanders’ call for a “political revolution” in America. It’s not going to happen without organisation. And a presidential election campaign is not an organisation.

In 2008 Hillary Clinton ran for president and built a huge base of supporters, coming close to defeating Obama for the Democratic nomination. She managed to sign up about 2.5 million supporters. Keeping in mind that Clinton has always had money and staff, and always intended to make another try for the presidency (as she’s now doing), the New York Times story last week about her campaign contained this stunning fact: of those 2.5 million names, only 100,000 turned out to be valid email addresses just eight years later.

Hillary Clinton managed to lose 96% of her supporters’ contact details in just eight years. And she’s struggling to raise money from individual small donors, which Sanders is doing exceptionally well.

That’s what happens when you run a presidential campaign every four or eight years. You can’t sustain the organisation, and you lose valuable contact details from people who clearly support you and your ideas.

Even worse than Clinton is the example of John Edwards, who ran an unashamedly social democratic campaign in 2008, far to the left of both Clinton and Obama. Of the hundreds of thousands of people who signed up to support his agenda for change, there is nothing left at all.

Bernie Sanders will understand all of this. On the wall of his office in the US Senate is a framed photo of the legendary American Socialist Eugene V. Debs. Debs, as Sanders knows, founded one organisation after another in his life, starting with railway workers, and continuing with the Industrial Workers of the World and the Socialist Party.

That Party for all its flaws managed to build a nationwide organisation with hundreds of elected officials, thousands of local branches, and hundreds of local and national publications. Though the Party had a “near death experience” in the 1920s, it was still around – if crippled and weak – in time for the Great Depression and its revival.

There is nothing like this today in the US. The last remaining survivors of Debs’ and Thomas’ party helped found the Democratic Socialists of America (DSA) more than 40 years ago. But DSA has not thrived, and never achieved its goal of creating a powerful democratic socialist presence in the country.

There needs to be such an organisation, whether it’s a socialist party, or a labour party, or even something like DSA, but with real clout. Without those things, electoral campaigns become meaningless expressions every few years of protest or hope – and not sustained movements for social change.

So what happens now? The most likely thing is that Sanders will wage a good fight, and then Hillary Clinton will capture the Democratic nomination. When that happens, Sanders himself and most of his supporters will support Clinton, because the alternative of someone like Donald Trump winning the presidency is truly terrifying.

But a second Clinton presidency will almost certainly disappoint most of those who voted for it, just as the first did, and some will grow disillusioned and withdraw from politics. This may be particularly true with young people for whom the Sanders campaign is their first taste of politics.

Sanders is calling for a “political revolution”, and for giving the “billionaire class” (as he calls it) a good kicking.

But revolutions take time, and even the lengthy presidential campaign in America is not long enough.

What America needs is a mass party of the left. This can be built inside the Democratic party or outside of it. But it cannot be replaced by a presidential campaign, no matter how charismatic the candidate or how compelling the message.

I doubt very much if anyone in the Sanders campaign is giving any thought to this at all. I doubt it. And that’s the problem with Bernie Sanders.

14 Comments on "The problem with Bernie Sanders"