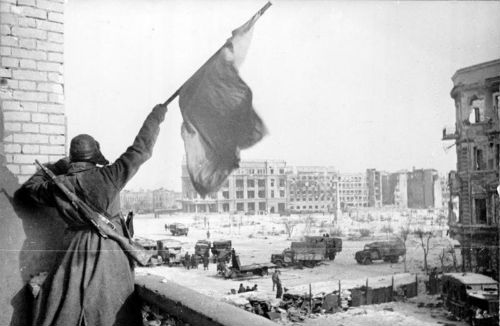 By the summer of 1942, the outcome of the second world war was easy to predict.  The German U-boat operations in the North Atlantic were proving increasingly successful in sinking Allied ships.  In North Africa, Rommel’s forces had taken Tobruk.  And one year into Operation Barbarossa, the Nazi invasion of the Soviet Union, the Wehrmacht had wrested control of most of the western part of the country.  The forward march of Nazism seemed unstoppable.

For the last several months, news reports about the onward march of the fascists of “Islamic state” have echoed that same sense of inevitability.  Iraq’s second largest city, Mosul, fell in June.   Tikrit, Saddam Hussein’s home town, fell the next day.  In August, the Yazidi stronghold Sinjar fell.  Every day brought new reports of victories for the Islamists.  ISIS seemed unstoppable.

Like Stalingrad, Kobane has become something of a ghost town, battered by shelling and bombing, most of its civilian population having fled.  What remains behind are the determined fighters of the Kurdish People’s Protection Units (YPG) — many of them women.  And those fighters have now fought the fascists to a standstill.

Before Stalingrad, the victory of Hitler seemed highly likely, if not inevitable.  After Stalingrad, the defeat of the Nazis became certain.  From the time the Wehrmacht’s 6th army finally surrendered in February 1943 until the final collapse of the Third Reich in May 1945, the German army never again won a decisive victory.   From then on, the war consisted of a long and bloody retreat back to Berlin.

It is too early to say if this will be the case with Kobane.

Under enormous international pressure, the Erdogan regime in Turkey has finally agreed to allow Peshmerga fighters from the Kurdish autonomous region in Iraq to join their fellow Kurds in defending Kobane.  As I write these words, they are on their way.

At the same time, units of the pro-Western Free Syrian Army (FSA) have arrived in Kobane to join the YPG fighters.

And these forces — the YPG, the FSA and the Peshmerga — are being backed by the immense air power of the United States and its allies.  The US is dropping not only bombs, but supplies that have been stiffening resistance in Kobane.

According to one report, “News reached the world on Monday morning that an airdrop by Coalition forces of 27 bundles of arms, ammunition and medical aid had been delivered successfully to the YPG in Kobane. Finally, the long awaited, much-needed arms had been delivered to the YPG guerrillas, much to the dismay of Turkey. All morning, people in the village received the news with satisfaction, proclaiming ‘Long live Obama.’”

In doing so, these airdrops repeat the support given by the US to the Soviets during the Second World War.  At that time, there were no US “boots on the ground” in Russia, but there were plenty of supplies coming through.  In fact, it has been argued that part of the reason why Hitler needed to take Stalingrad was to cut off the flow of US supplies and weapons going up the Volga.

A defeat for the Islamists in Kobane doesn’t necessarily deal the fascists a death blow.  It’s more likely that the struggle will see ups and downs, with some victories for the Kurds and their allies, and some for “Islamic state”.

But for the first time in a long time, the fascists are feeling the sting of a strong and motivated resistance.  In Kobane today, the spirit of Stalingrad lives.

2 Comments on "Kobane is this generation’s Stalingrad"